What a wonderful occasion it was last Sunday, when around 60 people, led by Bishop Christopher, gathered in All Saints to give thanks to God for 150 years of Christian service since the church was dedicated on 16 December 1862.  Bishop Christopher was assisted by his Chaplain, Sal MacDougall, Les Whitfield and Tim Thompson.  Jill Whitfield played the organ.  Ann Kennedy acted as verger, Elsie Horton and Gill Stokes read the Lessons, Liz Murray served, and Nicholas Bennett sang beautifully during Communion.  The atmosphere was full of joy and the morning was crowned by a splendid lunch in the Village Hall - many thanks to Sue, Carol, Ann, Doreen, Ruth, Elsie and everyone else who played such an important part in preparing this!  Bishop Christopher and Mrs Lowson were able to join us for the lunch and it was good to meet them in a more relaxed setting. 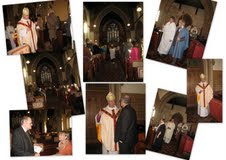 It was fantastic to welcome our friends and supporters including Miles Hobart-Hampden, the 10th Earl of Buckinghamshire, whose family has so many connections with Nocton.  He and Chris Howard are distantly related, both being descended from the 3rd Earl, although as Chris explained, his descent was apparently via a chambermaid rather than the 3rd Earl's wife.  Miles has been researching the family's history and shared some of his findings.

Marianne Overton, our County Councillor, made a presentation to All Saints on behalf of Lincolnshire County Council, offering the Council's congratulations on our 150th anniversary.

We look forward to the 200th anniversary!
Posted by Liz Murray at 09:27

Liz Murray
All Saints Church is a fine example of a mid-Victorian Gothic revival church. Consecrated in Dec 1862 as All Saints, on the site of the former and much smaller St Peters. The grand building is still in use today and is successfully holding its own against the tide of secularism.