Trinity Sunday falls on 31 May.  Being the fifth Sunday of the month, we are having an extra special Group Service which will be at 10.30 (not our usual 9.30).  Not only will we be joined by the congregations from Branston and Potterhanworth, we will also be welcoming our neighbouring benefice, Metheringham with Blankney and Dunston.  Please join us as we worship together.
Posted by Liz Murray at 20:05 No comments:

Notice to all residents from the Parish Council

(I don't normally post non-church notices, but this is important for everyone)

All residents are invited to attend this meeting to discuss with your parish councillors two important issues which affect the future of our village:

Replacing our Village Hall – come and hear the results of the recent consultation and find out more about the next steps in this exciting project.  There is still time to have your say!

Neighbourhood Plan – together with our colleagues in Potterhanworth we are to prepare a Plan which, if adopted, will help shape the future of our village in the way that we, not others, want!  This will be a formal document which developers will have to take note of if they want to build in the village.  The Parish Council needs the community’s support in preparing this Plan so please come along to find out what’s involved and how you can help.

This will be a very informal meeting lasting no more than an hour or so and wine and soft drinks will be available.

We look forward to seeing you at the meeting!
Posted by Liz Murray at 20:31 No comments:

Over the next 4 years the bell ringers at Nocton Church are going to attempt to ring a half muffled quarter peal to commemorate the centenaries of the deaths of the 12 Nocton residents/natives who made the ultimate sacrifice during the Great War.  The plan is to ring these quarter peals on the actual anniversary of their deaths if possible.

Sadly we have realised after doing our research that we missed the anniversary of the first Nocton resident/native to be killed during the Great War and so to correct this mistake the bell ringers are planning to ring a half muffled quarter peal on Saturday 30 May 2015.  The ringing will last around 45 minutes and will have the mournful sound of being rung half muffled, which gives a loud stroke followed by a quiet stroke (effectively an echo).

Private Reuben Horton was the son of Ellen Horton of Ten Row Nocton and was married to Florence Ada Horton.  He served during the Great War in the 1st Battalion of the West Yorkshire Regiment (Prince of Wales’s Own).  He was sadly killed in action on 30 January 1915 aged 35, making him the first Nocton resident/native to be killed during the Great War.  His name appears on the Ploegsteert Memorial in Belgium on the panel 3 to 4.  He is also remembered on the War Memorial on the west wall at the back of Nocton Church and on a plaque in his memory at the east end of the south aisle in the Church.  A half muffled quarter peal will be rung on the bells at Nocton Church in his memory on Saturday 30 May 2015. 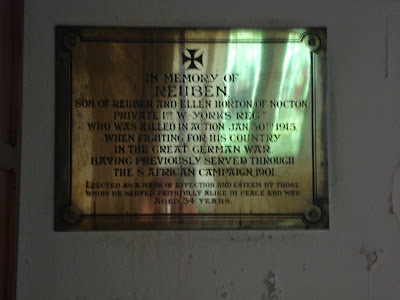