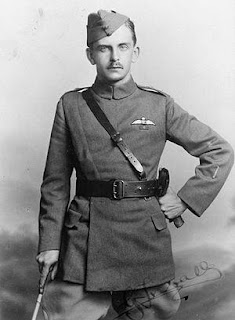 
On Saturday 7th November 2015 a quarter peal (lasting approx 45 minutes) will be attempted at All Saints Church Nocton to mark the centenary of Group Captain Gilbert Stuart Martin Insall VC. MC. on being awarded the Victoria Cross during the Great War.

Group Captain Insall is buried in All Saints Churchyard and survived the Great War dying at the age of 77 on 17th February 1972.

“For most conspicuous bravery, skill and determination, on 7 November 1915, in France. He was patrolling in a Vickers Fighting Machine, with First Class Air Mechanic T. H. Donald as gunner, when a German machine was sighted, pursued, and attacked near Achiet.
The German pilot led the Vickers machine over a rocket battery, but with great skill Lieutenant Insall dived and got to close range, when Donald fired a drum of cartridges into the German machine, stopping its engine. The German pilot then dived through a cloud, followed by Lieutenant Insall Fire was again opened, and the German machine was brought down heavily in a ploughed field 4 miles south-east of Arras.
On seeing the Germans scramble out of their machine and prepare to fire, Lieutenant Insall dived to 500 feet, thus enabling Donald to open heavy fire on them. The Germans then fled, one helping the other, who was apparently wounded. Other Germans then commenced heavy fire, but in spite of this, Lieutenant Insall turned again, and an incendiary bomb was dropped on the German machine, which was last seen wreathed in smoke. Lieutenant Insall then headed west in order to get back over the German trenches, but as he was at only 2,000 feet altitude he dived across them for greater speed, Donald firing into the trenches as he passed over.
The German fire, however, damaged the petrol tank, and, with great coolness, Lieutenant Insall landed under cover of a wood 500 yards inside our lines. The Germans fired some 150 shells at our machine on the ground, but without causing material damage. Much damage had, however, been caused by rifle fire, but during the night it was repaired behind screened lights, and at dawn Lieutenant Insall flew his machine home with First Class Air Mechanic T. H. Donald as a passenger."

More information about Group Captain Insall can be found on Wikipedia at https://en.wikipedia.org/wiki/Gilbert_Insall 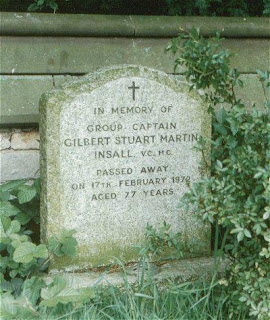 34 people came together to give thanks to God for His blessings on us all.  Thanks to all who decorated the church for the Harvest Thanksgiving service.  We also had the benefit of the display made by donations from Nocton Community Primary School to Lincoln Community Larder - much appreciated by us and by the people who will benefit.  The collection at the service raised around £50 for the church and another £50 for WaterAid - an international charity that transforms lives by improving access to safe water, hygiene and sanitation.

Following the service was the (in)famous Harvest Supper.  This was greatly enjoyed by all who attended.  Thanks to the fundraising team for all the hard work behind the scenes, all who helped in any way especially to all those who did the catering, Chris for the potatoes and the wine, and to Ted & Ian who unblocked the sinks at the end!  A special mention to Rev Les Whitfield for selling off the left over food at the end, including an already open bag of salad!!

The Harvest Supper raised £400 for church funds.  A massive thank you to all who attended the service and/or the supper - see you again next year!
Posted by Liz Murray at 21:41 No comments: