Just a reminder that on Saturday 27th Aug there is another fantastic wine tasting evening at the Village Hall. They have been great evenings in the past with lots of expert wine knowledge on show. There are a few tickets left but they are going fast. If you require any, please get the tickets from the Nocton Social Club Bar (£15 - Includes all wine and food) Tuesday or Thursday evening this week.

Thanks to an application on behalf of Nocton PCC, by Sue Morris and Carol Bennett, we have been awarded £1000 by Lincolnshire Coop as part of its 150th birthday celebrations, to produce a new guide book for the church. The current guide is over 20 years old with limited photographs so it will be a great to have a new glossy book available. As next year is also our 150th anniversary it seems a very appropriate time to launch it.
The next step will be to come up with some conceptual idea's. I know Carol and Sue have things in mind, which we as a PCC look forward to seeing soon.
Our sincere thanks are sent to Sue and Carol for their efforts thus far.

Additionally, Nocton School have also been awarded £1000 by the Coop to set up a kitchen to teach the pupils cookery. Well done to them alsol!
For a matter of interest, there were 700 applications for the 150 grants awarded!!
Posted by Chris Hewitt at 15:22 No comments:

The work is well underway now with scaffolding towering above the Chancel to the height of the Nave ridge.
The initial work is to remove the Large coping staones on the eastern edge of the Nave to allow lead to be inserted and the stones to be reseated. The large patch of water staining on the 'Christ in Majesty' fresco on the western side of the chancel arch seems to have been coming in from open gaps in the joints where the large base kneeler stone has been seperating from the building. This is now under repair and should !!! cure that problem. 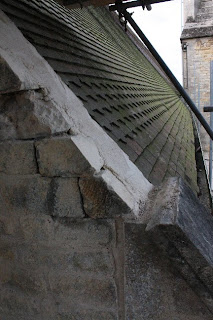 We have also had the ceiling of the chancel inside the church partially cleaned, there is more to do but the images are already bursting into life. 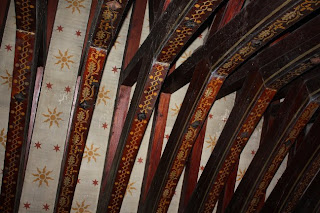 Paul Mendham has also taken measurements and a template of the cross at the eastern Nave end to investigate the cost to replace the missing western Nave end cross which fell down some 10 years ago with a similar one. There are no records we are aware of that show the cross that originally stood on the Western Apex, it may have been the same or different. 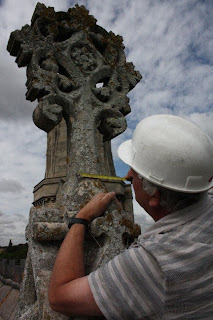 Work continues and over the next 10 days a large temporary roof will be erected over the chancel to protect the roof when the tiles are removed. 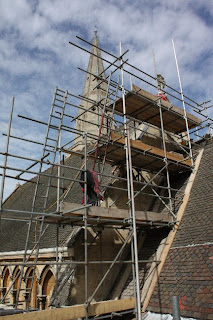 NB. All the high level scaffolding has now been alarmed with infrared beam sensors which phone out in the event of being activated.
Posted by Chris Hewitt at 20:53 No comments: