On 19th January the Parish Council hosted a meeting between Nocton residents and representatives of Nocton Dairies.  The aim of the meeting was to provide residents with an opportunity to ask questions about all aspects of the proposed Dairy development on Nocton Heath.
The meeting was independently chaired by Liz Murray (one of the Church Wardens) and was attended by some 100 people, the overwhelming majority of whom were from Nocton.
After short presentations from Peter Willes of Nocton Dairies and Andrew David, a Nocton resident who outlined some of some of his concerns about the proposal, there followed a lengthy and detailed question and answer session covering environmental, traffic, spreading of digestate, public health and economic issues associated with the Dairy development.  There were also a number of questions and comments from residents about Nocton Dairies’ recently submitted application for an underground digestate pipeline from the Dairy  to Wasps Nest. 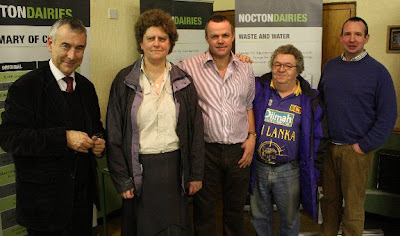 Left: Andrew David, 2nd Left: Liz Murray, Centre: Peter Willes, Right: David Barnes.
The discussion was lively and generally very good-natured and covered a wide range of issues and concerns about the Dairy.
At the conclusion of the meeting Liz Murray received a vote of thanks for the effective and very fair way in which she had chaired the meeting.
(Thanks to Ian Goldsworthy for his parish mag submission which I have abridged here. The full unabridged version will appear in the Feb parish mag.)
Posted by Chris Hewitt at 17:57