What a busy day in Nocton

A freezing start to the day of around -7c, did not put a chill on villagers Christmas spirits, as different organisations put on events for the community.

The Christmas Tree Festival in the church commenced its last day, we had a steady flow of visitors, but the weather has put many people off which has been quite disappointing. However the mulled wine, freshly baked sausage rolls and mince pies lightened things up. The Dunston Band played again brilliantly. Thanks to Roy and all the members who came along. 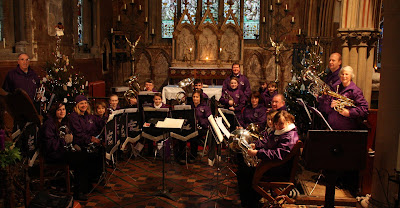 Afterwards Santa paid another visit to the village this time at the Nocton Social Club. Lots of of children received their first present of this Christmas today, others were heard 'Ordering' their IPod Shuffles directly from Santa. ﻿ 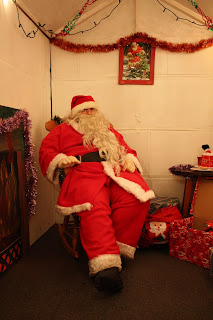 At 5.30 the Village Carol Singers started their annual rounds covering for the first time in the last few years the whole of Nocton Park. Many thanks to all those who took part singing or collecting, and thanks to the great many people who opened their doors to us and gave us a donation  -  Hopefully not just to go away!!!

We raised a fabulous £125, twice the amount raised last year....Thanks to all of you. We will split it equally between the Church Roof Restoration project and our long term sponsored charity MIND.

Afterwards we all retired to the Village Hall for warm drinks and food put on by the Village Hall Management Committee, organised by Philip and Joan, Pete and Lorna. And a Big Big thankyou for donating the takings of the evening to the carol singing pot.
Posted by Chris Hewitt at 20:59

Liz Murray
All Saints Church is a fine example of a mid-Victorian Gothic revival church. Consecrated in Dec 1862 as All Saints, on the site of the former and much smaller St Peters. The grand building is still in use today and is successfully holding its own against the tide of secularism.